There is a growing urgency for the United States to address the critical challenges of climate change and global economic competitiveness. A robust energy innovation agenda must be at the heart of this strategy because all the technologies we need to address climate change simply do not yet exist. Bipartisan momentum is gathering around a technology forward innovation agenda. For the United States to effectively nurture climate-saving technologies and maintain our position of global economic leadership, we must triple our investment in the full energy innovation lifecycle. This will require increasing federal support for basic science research to creating effective federal institutional and financial structures to support the scale-up and demonstration of low-and zeroe mission energy technologies for deployment here and export abroad.

Both public and private spending on energy R&D increased globally in 2017 and 2018. This increase followed four years of decline with investment concentrated primarily in low-carbon energy technologies. Corporations remain the largest source of energy innovation funding in terms of total dollars, but government spending also plays a major role in this sector worldwide. From 2017 to 2018, global spending on energy innovation by corporations and governments increased, in both cases by approximately 4%. The global increase in public funding for energy research was driven by China and the United States; however, it did not keep pace with growth in global GDP.

The United States fell from 13th to 14th place in terms of public energy R&D spending relative to national GDP between 2015 and 2017 (See Figure 1). Relative to most other developed economies, the U.S. government dedicates a smaller share of its research budget to energy and other industrial technologies, including technologies for making heavy-industry manufacturing processes cleaner and more efficient. In contrast, China was fourth globally, and has continued to expand its relative lead in public energy research, development and deployment spending as a share of GDP. Substantial public spending, along with government subsidies and supportive policies, explain why China was the world’s largest market for energy investment in 2018, even as Chinese companies were expanding their share of new markets for clean energy technologies such as electric vehicles.

Figure 1. Government Energy RD&D Investment As a Percentage of GDP, 2017 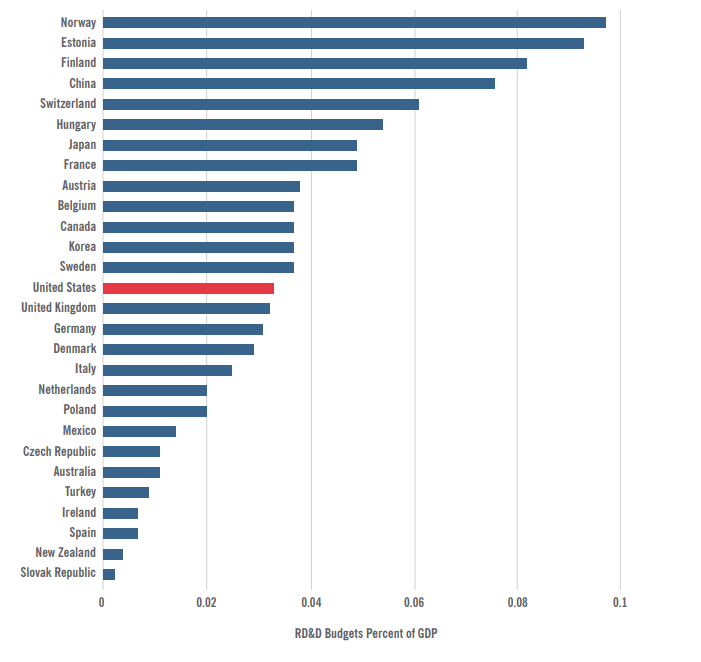 The United States is in a global clean energy technology race and needs a galvanizing clean energy innovation agenda with a strong long-term signal. Encouraging only early-stage R&D will not be enough, serving only to support the invention of technologies that will die an early death in the lab, or be fully developed abroad and sold back to us. Rather, well-targeted public investments and well-designed public policies for the full innovation lifecycle are needed to scale the next generation of advanced energy technologies.

For Research and Development:

For Demonstration and Deployment: 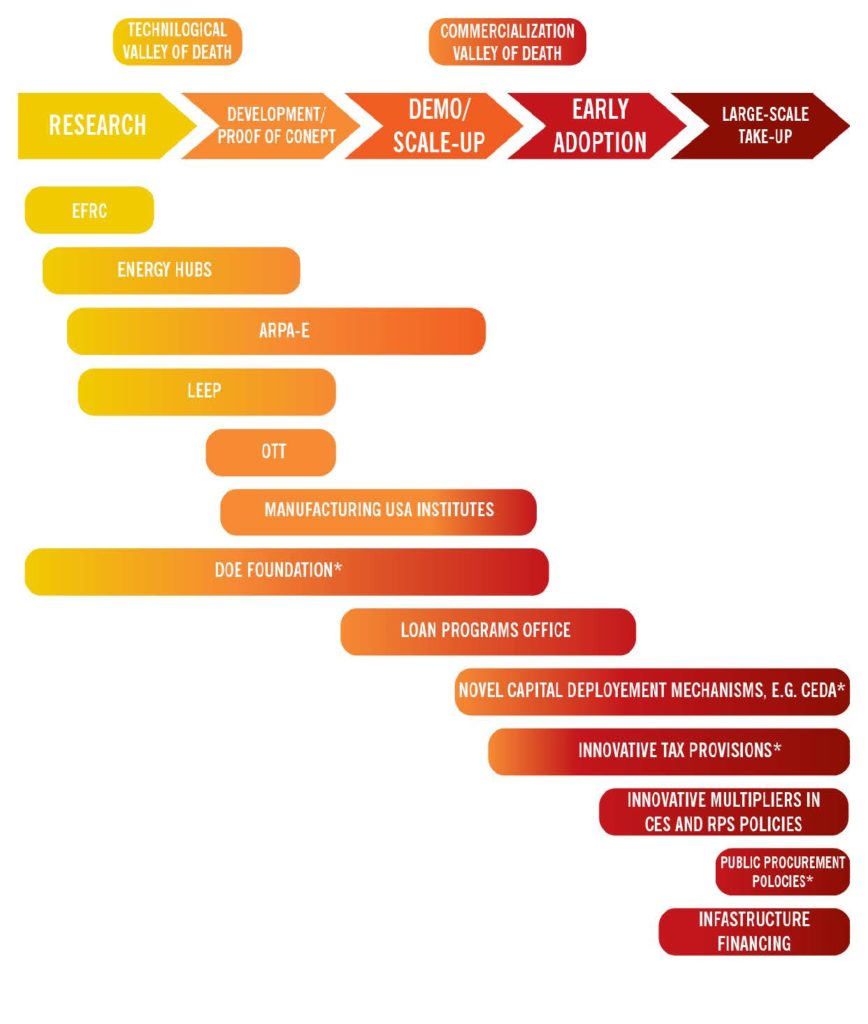 Source: AEIC Generated Items with a * are proposals and currently don’t exist or are currently limited in scope like procurement policies