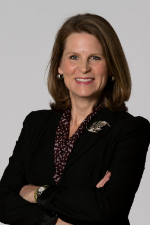 Elizabeth H. Shuler is the Secretary-Treasurer and chief financial officer of the AFL-CIO, the second ranking officer of the federation, the first woman elected to the position, and the youngest to join the federation’s Executive Council. First elected in 2009, she is responsible for overseeing the federation’s finances and operations, along with leading broader policy initiatives and campaigns. Liz started her career in Portland, Oregon as a union organizer with International Brotherhood of Electrical Workers (IBEW) Local 125. Prior to her election as Secretary-Treasurer of the AFL-CIO, Liz worked her way up the ranks of the IBEW, honing her mobilizing, policy, legislative and leadership skills, and winning critical labor and progressive legislative fights on the West Coast. She ultimately rose to executive leadership at the international headquarters in Washington, D.C., where she planned and executed IBEW strategy and program in the energy, manufacturing, broadcast, telecommunications and government affairs sectors of the union.

Liz’s determination to strengthen working people’s voices in the economy drives her passion for engaging and mobilizing the rising American workforce – young workers, women, people of color, and immigrants — and making the union movement in America their most powerful advocate. Liz leads the AFL-CIO’s initiatives on the future of work, clean energy economy, workforce development, and empowering emerging leaders in their unions. Liz is committed to busting myths about labor, to leveraging the labor movement’s diversity for innovative approaches to social justice, and to making the benefits of a union voice on the job available to working families everywhere. Liz chairs the AFL-CIO Executive Council Committees on Finance and Women Workers, and represents the AFL-CIO on the boards of the AFL-CIO Housing Investment Trust, International Trade Union Confederation, National Women’s Law Center, Solidarity Center, MIT Future of Work Advisory Council, among many others.